Today I’d like to tell you about two movies I’ve watched recently, both starring actors in their twilight years, who put in a hell of a great performance at not being what they seem.

Lately, I’ve been keeping myself busy a lot. Keeping the ship of my mind from dashing on the rocks of despair and disgorging its precious cargo of sanity (and hotpants!) has become my full-time job, on top of my full-time job, and also writing, my other full-time job.

Keeping busy can be a lot of things – reading, writing, working out, cooking, seeing friends, and of course, watching TV shows and movies.

Today I’d like to tell you about two movies  I’ve watched recently, both starring actors in their twilight years, who put in a hell of a great performance at not being what they seem. There will be NO spoilers today!

Grumpy Old  Man The First: I Am Not a Serial Killer

There is so much to recommend I Am Not a Serial Killer. The cast is great, as it contains Max Records (Max from Where The Wild Things Are) who I would have probably written off as a twee indie-movie darling before watching, because I am judgmental like that, and would have been WRONG to do so because he is excellent; Christopher Lloyd, who is the reason I watched the film because I adore his performances in just about anything; and Laura Fraser, who first won my heart as Lavinia in Titus, Julie Taymor’s magnificently bonkers adaptation of Shakespeare’s Titus Andronicus.

Additionally, it was made by an Irish-English collaboration and filmed in Minnesota. I thought that was interesting and wondered if there would be any odd quirks demonstrated by a British production company trying to depict small-town American life. Not as far as I could tell, but I’ve also never been north of the Mason Dixon line so for all I know Minnesotans drink coffee out of elk skulls, fear the color green, and worship Legos.

Max plays John, a young man diagnosed with sociopathy who works in his mother’s funeral home. His morbid fascinations are remarked upon by the entire community, who have never heard of the concept ‘innocent until proven guilty’ and are basically waiting for him to tip over and start collecting human body parts. He’s like a young Dexter, but he’s not really done anything wrong yet. Naturally, negotiating daily life is frustrating and lonely for him, so he has only one friend and a lot of hobbies. One of his hobbies is trying to maintain his sanity, and wildly overthinking the threat he perceives himself to pose to others. He’s a poster child for the Information Age, where we imagine ourselves to be worse than we are, and a diagnosis can (in some cases) do more harm than good.

Another of his hobbies is a fascination with serial killers. When murders begin happening in his town, he is engrossed, and tries to figure out who the killer could be.

Christopher Lloyd plays John’s elderly neighbor Crowley, a pleasant man who dotes on his wife and isn’t really grumpy until later in the movie. John helps Crowley and his wife with household chores, even helping Crowley use his Smartphone to take a selfie to send to his wife, which is #OldCoupleGoals. At one point John has to help the ailing Crowley take a bath, a task that is humiliating for both but still necessary, and treated by the film makers with as much dignity as such a task can muster. Crowley and his wife have no children and no one else to help them, so this fledgling sociopath rolls up his sleeves and pitches in. It is interesting that no one else in the neighborhood helps the old couple but John and his family, and the Crowleys see him as nothing more than a shy, weird boy and accept him as he is.

What delighted me about this movie was the very complex character building, which no doubt comes from the source material. It is an adaptation of the first novel in a series by Dan Wells, which I haven’t read but am now curious to check out. Since the protagonist is a teenager, some markets are treating the book as Young Adult, some as adult, and some are aiming it at both. Given the subject matter I would guess it’s better for kids with very mature tastes – back in the day before the YA movement took off, you just had to know the kid and what they liked and were ready for. I remember a kid reading IT in my 4th grade class, so I wanted to read Stephen King, too. My Dad was like ‘Ha ha, that’s not happening’ and got me Eyes of the Dragon and Cycle of the Werewolf, which were good intros.

I Am Not a Serial Killer is categorized as a supernatural horror thriller, so right there you can tell it’s got some unusual twists. And it is pretty dark stuff. I still highly recommend it to fans of horror and/or thrillers, and hope it gains a wide following. The ending was just beautiful, and I hope they adapt more of the books! 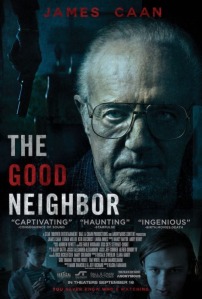 The Good Neighbor is both a well-written thriller and a clever observation on the morality of human behavioral experimentation as it relates to the Information Age. It’s not an indictment,  more a think-piece.

Two neighborhood kids, Ethan and Sean (Logan Miller and Keir Gilchrist, who I recognized from It Follows) with lots of time and money decide to run an ‘experiment’ on an elderly neighbor that is known to be unfriendly and suspected of poisoning a neighbor’s dog. They want to convince him that his house is haunted, and document the process. Although it is Ethan’s idea, Sean is the actual brains behind the project, and contributes all the technical equipment (cameras, mics and computers) needed as well. They wait for Mr. Grainey, played with understated brilliance by James Caan, to leave on his weekly grocery run, then break into his house and plant surveillance equipment everywhere. They also add ‘special effects’ stimulae, like a banging door, a radio that randomly turns on and off, and a thermostat governor so they can control aspects of Grainey’s environment.

Obviously, there are some problems with this. Sean proves to be the more objective and compassionate of the two, pondering the long-term effects of their ‘pranks’ on Grainey and mentioning the infamous Little Albert experiment. He wants to do the bare minimum, gather what data they have, and end the experiment. Ethan, however, wants to take things as far as he can. He bullies Sean into continuing with the experiment, insisting that Sean owes him for his happiness now. Ethan actually reminded me of Pube from the Preacher books quite a bit.

In a role that a lesser actor would be tempted to overact, Caan doesn’t. He’s a terse old man who sits around his house in sneakers drinking cheap booze all day, and gets into arguments with the neighbors on his few forays out of doors. His face isn’t exactly expressionless- it’s more that he wears his disinterest on his sleeve. It’s a cinch Caan’s casting was intentional; I couldn’t help but think about how meta it is to see these two runty nerds picking on Sonny Corleone, that legendary deliverer of trash-can beatings, and how eloquent a point was made about the disrespect the young have for the old without being obvious. That old man on the park bench might have Seen Some Shit in Vietnam, in Korea, hell, even in Operation Desert Storm. That old woman might have grown up in a war-torn country, or been in combat herself. Someone lived a lifetime before I came along, and I’m by-gosh going to respect them for it until they prove themselves unworthy.

And Grainey does indeed deliver some gripping content. An exterior screen door the boys have rigged to slam randomly startles Grainey– but only for a moment. He goes full Jack Torrance on the door with a fire axe. After that, the boys are considerably shaken, but like the addicts they are, can’t quite stop themselves from pushing the old man to see when or if he’ll break.

And break he does, just not in the way they expected.

Shit goes bad, and some very intriguing back story comes to light. Unfortunately, not everyone survives the situation, and there is courtroom drama interspersed with the surveillance, as well as some flashbacks that I found a little confusing until I figured out how to read them.

I wasn’t expecting to enjoy The Good Neighbor as much as I did. I would highly recommend it to anyone looking for a good drama. If you are troubled by victimization of the elderly, you might give it a pass, though.

2 thoughts on “Grumpy Old Men: I Am Not a Serial Killer and The Good Neighbor” 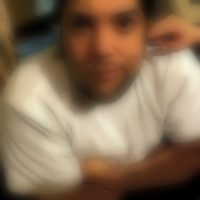 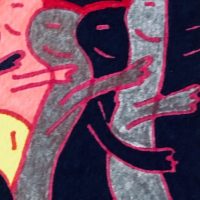